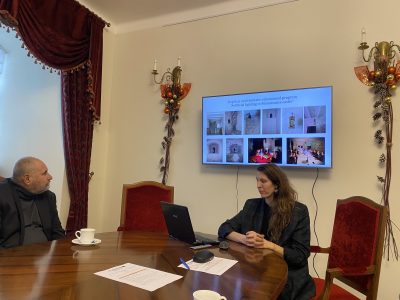 The goal of the project was to increase the number of tourists coming to the Kaunas district and the Bauska region in the autumn and winter seasons by creating artistic, educational and sports activities aimed at attracting visitors with different interests, history and heritage lovers. During the implementation of the project, both objects of cultural heritage were improved – Raudondvaris Manor purchased an outdoor stage with sound and lighting equipment, an LED screen, the ice rink installation equipment. Bauska Castle Museum – ancient lighting elements, replicas of ancient instruments, sound equipment, LED screen, stage podests, bars for windows, metal information boards, stands for cannons, a copy of a 17th century cannon carriage and a replicas of  17th century musketeer and artillery man costumes. At the same time, new thematic educations “Baltic Treasures”, “Artificial lighting in the Renaissance Castle” were created, outdoor exposition “15-17 century artillery”, a skating rink with free lessons was launched, demonstration competition of Bavarian curling was organized, and the historical festival “Castle Day” was organized, presenting the culture of manors, cooking, crafts, and arts. Workshops of artists, craftsmen, renaissance music and dance concerts have been implemented. Performers and artists not only from Lithuania and Latvia, but also Poland, Italy, Germany, Switzerland, and the Netherlands took part in the project’s activities.

The project partners aimed to increase the number of visits to both regions by at least 20,000 visits, and according to the results presented at the conference, this figure was achieved. Visitors willingly participated in the activities organized by the project partners both at the Raudondvaris Manor and at the Bauska Castle Museum.

During the project “Historic road: Raudondvaris-Bauska (LLI-498)”, not only new activities were implemented, both cultural heritage objects were improved, but also a strong cultural partnership was created. Bauska Castle Museum director Maris Skanis was happy that almost four years ago Raudondvaris Manor contacted their museum and invited them to visit, get to know the manor and its history and ongoing activities, and at the same time offered to implement a new project together. Both partners shared similar challenges: regional competition with big cities, seasonality and the desire to improve both castles to make them more attractive to visitors. The implementation of the project was supported by “Interreg VA Latvia-Lithuania Program 2014-2020” together with the municipalities of Kaunas district and Bauska. 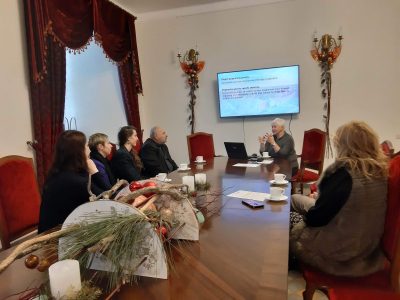 A tourism guide illustrating the project’s activities and results was presented at the conference too. In it you can also find information about other attractions, catering establishments, etc., located near Raudondvaris Manor and Bauska Castle Museum.

They can also be found in the Raudondvaris Manor and in the museum of Bauska Castle.

The final conference was also attended by representatives from Kaunas district tourism and business information and Bauska tourism centers. One of the goals of the conference was to share project experience with colleagues working in the tourism and culture sector and to establish new contacts. KDTBIC deputy director Inga Sutkuvienė also presented the project “Living by the rivers: development of tourism products based on the current and past history of the Baltic States (LLI-474 )” funded by “Interreg VA Latvia-Lithuania Programs 2014-2020” and being completed with partners from Jaunjelgava and Kuoknese. The project partners created a tourism route and QR codes to mark attractions located near the rivers in the mentioned regions.

More about project activities and results in Raudondvaris Manor: here

More about project activities and results in Bauska Castle: here