On March 20th at 16:00 in Bauska Castle and on March 22th at 18:00 in Raudondvaris Manor an early music concert “In Amoroso Foco” will take place. 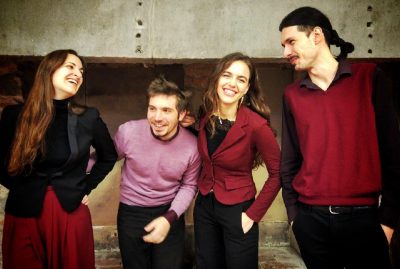 In a concert you will hear:

Love, in all his forms, has always been the absolute protagonist of music and poetry, and so it is for Italian Renaissance. In the refined and courtly style of madrigals, Love takes the godlike form of Cupid, and here the child tyrant is often represented as an invincible spirit that dominates the will of harmless mortals, pushing them to move constantly towards the desired object in an endless tournament; a jousting among opposite affetti, such as hope and disappointment, enthusiasm and dejection, joy and sorrow.

Nevertheless Love remains the source of the sweetest things that life can offer, and his ultimately positive nature is also highly celebrated and represented in Renaissance music, both in madrigals and other secular works. This program is dedicated to the contradictory depiction of Love and desire, so richly and imaginatively explored in the Italian Renaissance music, where even animals are metaphorically represented as either servants or victims of Love’s dominance. 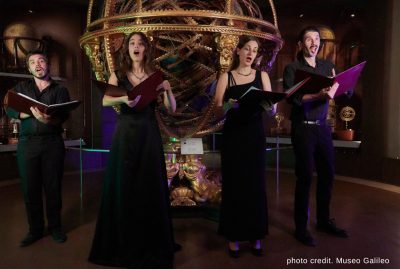 PassiSparsi ensemble was created in August 2019 by four young singers, Martha Rook, Cora Mariani, Neri Landi, and Lorenzo Tosi, all studying at the Conservatoire L. Cherubini in Florence. Although they come from different academic backgrounds, they all have experience as soloists and madrigalists in Renaissance-Baroque repertoire, and decide to join together to explore the Renaissance polyphonic repertoire. Since 2020 the ensemble collaborated with contralto Elisabetta Vuocolo.

Audience is required to wear respirators or medicine masks during the concert. Concert is free.

The event is organized by the project Historic Road: Raudondvaris-Bauska (LLI-498), which seeks to attract more tourists to Kaunas district and Bauska regions during the cold season by creating new artistic and cultural activities. This is already the fifth concert from the early music concert series organized by Bauska Castle Museum in cooperation with Raudondvaris Manor. Concerts take place in both project partners venues and are for free.

2022 October 28-29th a free “Castle Day” festival will be held at Raudondvaris Manor!  The first day of the festival will be opened by jeweler Nijolė Jovarienė’s jewelry exhibition “Vieversynės giesmininkai”. After that, the concert of “2 Forte” pianists Sigutė Mikalauskaitė-Garšanovė and Daina Kripavičienė will await. The musical program is called “Pasauliui nutilus” (After the world fell silent). It will feature [...]

On the 26th of February, 12:00, friendly match of Bavarian curling will take place in Raudondvaris Manor. The demonstration competition will have Latvian and Lithuanian teams. Everyone who is interested or wants to get acquainted with this winter sport, which is rapidly gaining popularity in the world and in Lithuania, is invited to come and watch the event live. After [...]

MIROSLAV PETKOV (trumpet, Bulgaria) and BODUROV TRIO (Bulgaria) Dimitar Bodurov (piano) Mihail Ivanov (double bass) Jens Dueppe (percussion) The colourful Bulgaria will be presented by the sounds of music of trumpeter Miroslav Petkov and &#8220;Bodurov trio&#8221;. Since 2016 Miroslav is the trumpeter of one of the most prestigious orchestras in Europe – Amsterdam&#8217;s Royal Concertgebouw orchestra. But in this concert [...]